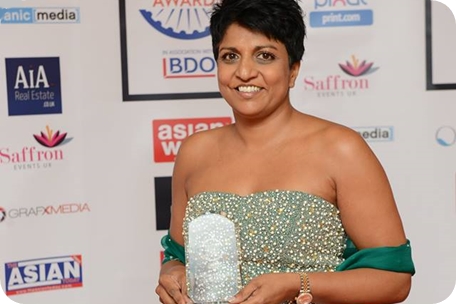 We are delighted to announce that our Partner, Bindi Palmer, has won the British Indian Awards, for Services to Accounting 2016.

The winners were announced at the award ceremony which took place at The Athena in Leicester on Friday 15 July 2016.

The British Indian Awards, presented by BDO, seek to recognise and reward individuals who have made contributions across various aspects of society including business, accounting, law, media and education.

Now in their fourth year, the awards are decided by public voting and a panel of judges. Bindi faced competition in her category from six other finalists, three of whom were from ‘Big 4’ accounting firms.

Recognising her contribution to the accounting sector, the judges commented that Bindi’s passion for international business, combined with client support offered through periods of significant regulatory change, gave her the edge in this category. In particular, they noted the need for such international skills and acumen in today’s business environment.

Bindi commented, “It is a great honour to be recognised by the British Indian Awards. I would like to thank my team and fellow Partners for supporting me. We live in an internationally connected world and clients often need access to advice and support. Being recognised for my work in this area is very rewarding, and also an accolade for the hard work and determination of the whole team at Rouse Partners. Finally, I would like to thank the awards organisers who put on a fantastic event.”